Fake advertising is a pain in the net | Blog | Lead Pronto

A Blog by Lead Pronto

Fake advertising is becoming more and more commonplace, and it’s not just the people who are conned out of their money that are the victims here.

Often an unscrupulous advertiser will ‘borrow’ a brand’s identity or other assets to ride on their back and carry out their dodgy advertising campaigns, and the company who they’ve borrowed from can end up on the wrong end of things with a slight on their reputation. This is what happened to Lead Pronto Ltd back in August 2019 when we were victims of fraud

A company called KS Online had copied part of our Windows & Doors scheme website and not removed any of our company information, so it looked like the site was run and owned by us. When the advertising campaign was exposed by a Daily Mirror article for giving the false impression that there were Government grants available for buying energy efficient windows, the Lead Pronto name was dragged through the mud.

Despite us pointing out to the Daily Mirror that we were in no way connected to this, they published an article which is still public (and still ranking highly in Google) and continues to cause a slight to our reputation despite no wrongdoing whatsoever.

What is interesting is the fact that the Daily Mirror themselves have been victims of fake adverts who have been stealing their mastheads to try and make news advertising look like a genuine news interview with Richard Branson. See the example below: 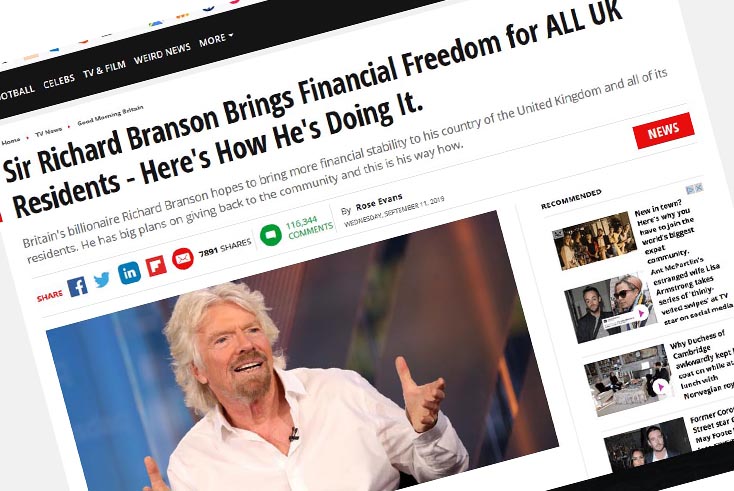 A bit of background proving we were in no way responsible…

We made a complaint on the 13th August 2019 to the Advertising Standards Agency about the greendealfund.net site which was mentioned in the Daily Mirror article, as described in our comment, we had been victims of fraud. A company called KS Online had copied part of our Windows & Doors Scheme website and not removed any of our company information, therefore it looked like we were responsible for the website.

KS Online is not a very reputable company, they have recently been fined for poor conduct, see here. We believe someone had possibly informed KS Online that our websites were doing well. KS Online then decided to copy us and unfortunately we have been caught in the middle.

You can tell from researching KS Online their websites and overall marketing is of poor quality. The differences between our approach and theirs is quite clear. KS make false claims and don’t seem to very often add their company information to their websites, nor do they seem to get sign off from their partners. 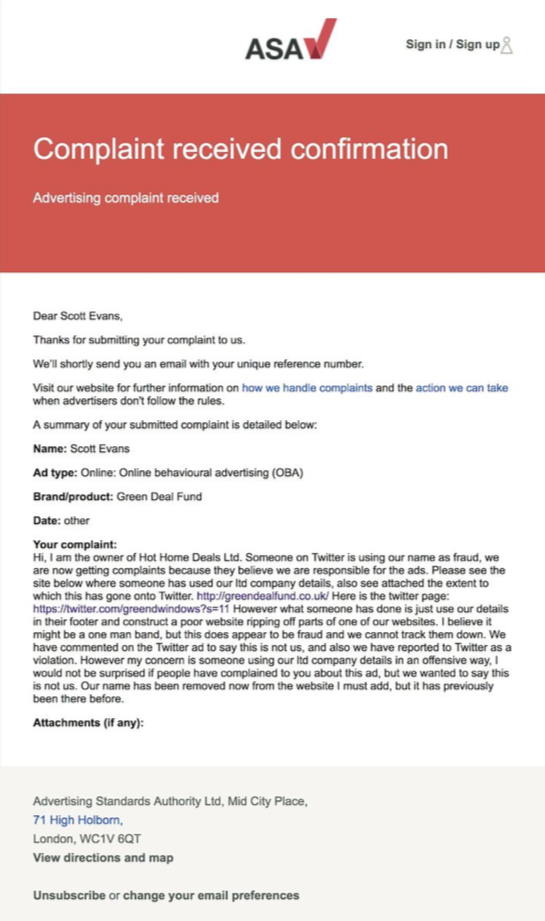 *ASA complaint about greendealfund.co.uk – at the time of the complaint we did not know it was KS Online who were running the website.

Unfortunately it’s difficult to provide significant evidence as KS Online had hidden their domain ownership details, and they also took the website down, meaning the ASA did not continue with following up our complaint.

Unfortunately for us the damage was already done via this Twitter post which sparked all the attention from consumer groups and the Mirror. Their website went onto to give more false claims about government funding, none of this was related to scrappage. 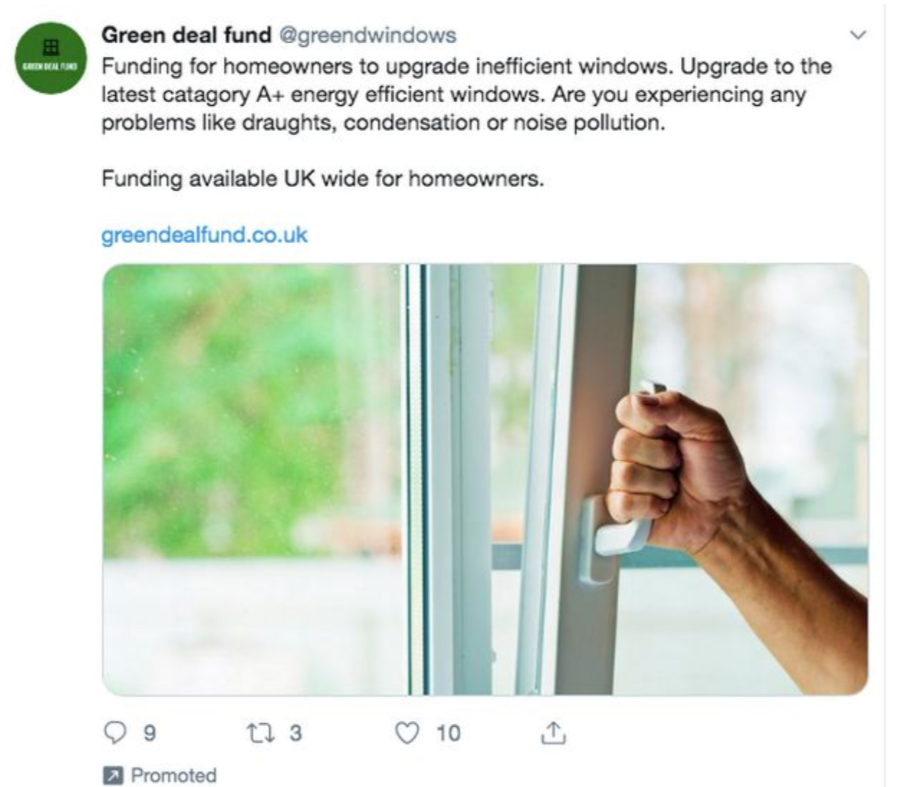 You can see our continued efforts at the time to inform people this was not our website. However, by the time we were looking at a cease and desist order to KS Online, the website had been removed. 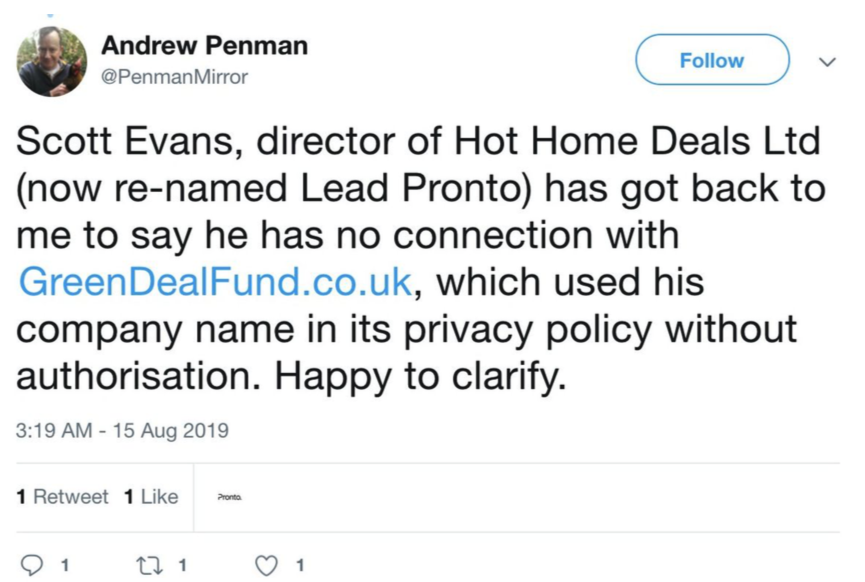 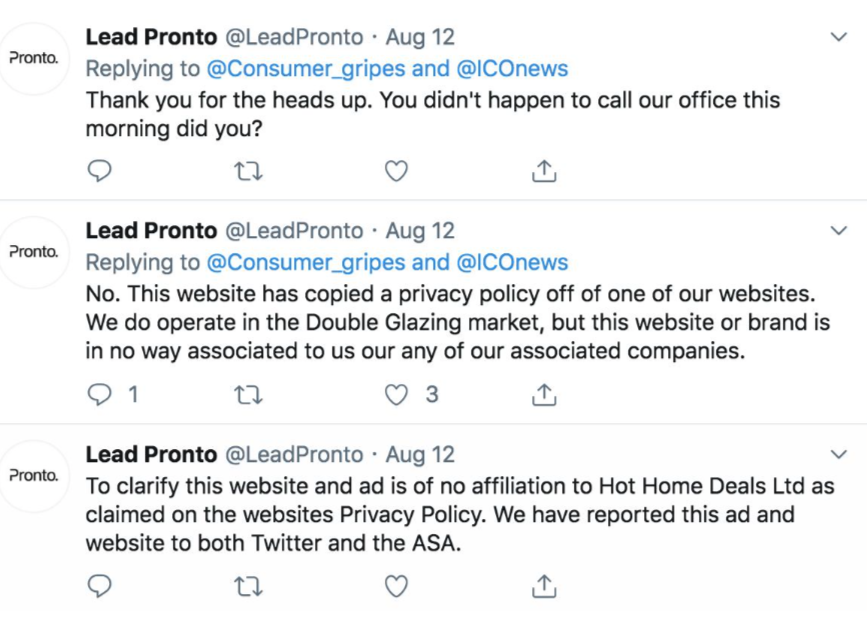 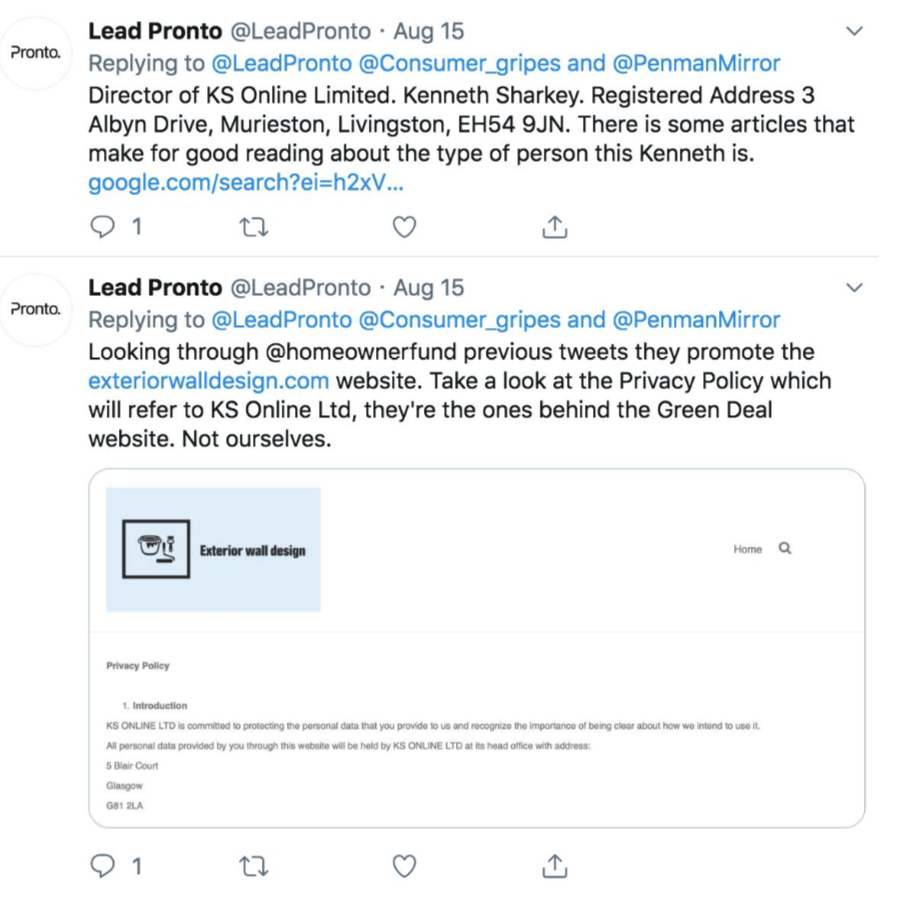 One of our employees also found a connection to KS Online on Twitter as he went down a rabbit hole exploiting some of their websites.

Please see below, this is how Alex (Our Head of Social) connected the greendealfunding.co.uk to KS Online. There is a bit of a chain here, but the main thing is the design/build of the websites, you can see they have been done by the same people. 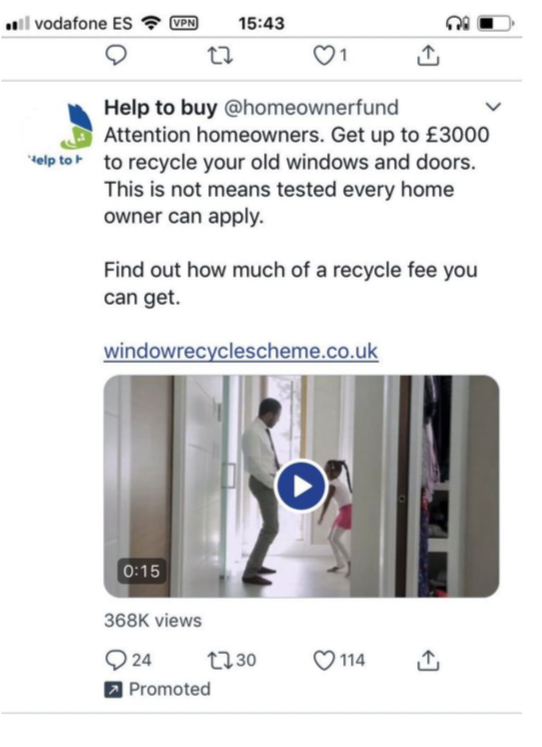 In summary we don’t actually know why the Daily Mirror featured us, as the journalist agreed with us that it was not our website. We could either leave no comment or comment, and we feel it’s unfair certainly as well to bring up TrustedWindowsDoors which was a comparison site making the same claims as other comparison sites with savings of up to 60%.

We’ve since taken that website down to avoid any further issues, and it had not been in use regardless. We continue to work with our partners to ensure our messaging is accurate and can be substantiated by facts.

We are disappointed that an article that continues to associate us with false advertising remains online when we were in fact the victims of wrongdoing. Our attempts to have the article removed from Google’s index have not been successful, and requests to have it taken down by the publication have not succeeded.

Our point is that it is very easy for someone to use your company’s identity in one form or another to carry out fraudulent advertising or other activity, and it’s very difficult to do anything about it. We’d hope that publications, such as the Daily Mirror, who can often find themselves being victims of fraud as highlighted above, would be more accommodating in removing falsehoods that impact negatively on small businesses like Lead Pronto.

Try before you buy...

Get 15 free leads to trial*