Welcome to Team Pronto. Yes, here’s a festive intro to some of the team here. We’re a happy little bunch of workers, some of us more elf-like than others, so we thought we’d share a little about ourselves by way of introduction this Christmas. 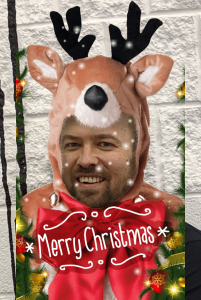 Our very own Biddable Manager Charles, hails from Jersey, and as you do, made a somewhat fleeting appearance (in a photo) years ago in Bergerac. Aside from brushes with fame, Charles, who has by far the best phone manner in the company, is setting his sights on a triathlon to mark a very important birthday next year!

What he wants for Christmas: To lose a couple of shots off his golf handicap – he currently plays off an amazing handicap of just 2. 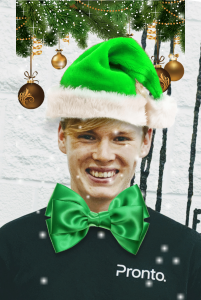 Essex-born Ollie is the youngest on the team and has gone from strength to strength as our SEO strategist. That said, he needs to work on keeping the contents of his stomach where they belong after company go-karting sessions. In his words, he says he is the only person stupid enough to support West Ham in the North West (probably) and is still kicking himself after at the age of 4 being invited into the West Ham dressing room to meet the team but refusing because he was too tired.

What he wants for Christmas: Plants that absorb toxins in light of new research surrounding air pollution. He would also like better rankings for all our clients. His new year resolution is to get the gym more, especially since he’s already signed up for it! 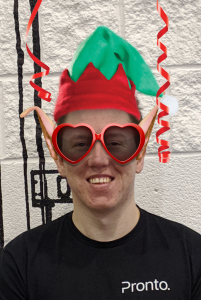 There’s nothing Al doesn’t know about PPC campaigns. It’s a shame the same skill level can’t be said for his beloved Everton. Usually found burning off fuel at an alarming rate in his Audi S4, he likes his protein shakes and is no fan of McDonald’s breakfasts.

What he wants for Christmas: Apart from being able to get more than 13 miles to the gallon in his 3-litre Audi, he is desperate to beat Scott at go-karting so would welcome a karting membership. 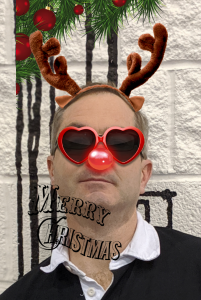 The latest recruit and the elder statesman on the team. Our content & marketing manager has years of experience working on newspapers, online media & marketing, he’s seen it all, despite wearing glasses, and would probably be a great addition to your pub quiz team, although you’ll rarely capture him on a photo with his eyes open (or with a smile for the camera for that matter).

What he wants for Christmas: A Premier League title win for Liverpool or another bike to add to his growing collection. As he says, everyone should know the rule for the number of bikes a cyclist should own is based on the formula n+1. 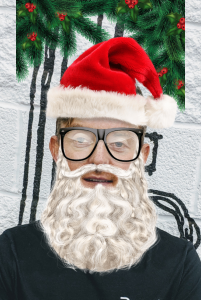 Founder of Lead Pronto, with many years of experience at companies he founded, including ZNC and We Are Web, Scott loves wearing his shoes out while walking about taking a call with clients. He likes to pretend he’s going to improve his diet, but at the first sniff of a roast dinner from the canteen upstairs and he’s a goner. He’s a master at go-karting so don’t even bother trying to take him on.

What he wants for Christmas: Apart from a few extra hours in the day there’s only one thing we are certain that Scott wants and that’s more leads.

Merry Christmas to one and all. Thanks for checking by and we hope to work with you all in some capacity in 2020.

Do we run leads in your sector?

Or do you need a bespoke campaign?

Get in touch Today